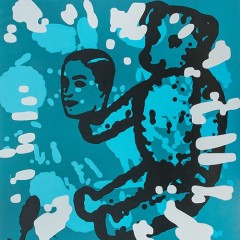 Ivan Csudai moves forward with small steps. The reason for this slow movement is not fear or uncertainty, but the purposeful creation and cultivation of his own idiolect,  a painting manuscript, simply everything that expresses the term of individual style.
Praetorium
Author
Ivan Csudai
Curator
Peter Michalovič

Ivan Csudai moves forward with small steps. The reason for this slow movement is not fear or uncertainty, but the purposeful creation and cultivation of his own idiolect,  a painting manuscript, simply everything that expresses the term of individual style. Having style means not only having an artistic signature, but also something extra, and that is the ability to permanently test the power and productivity of individual style in various types of work.

The first kind is epic work. In order for this term, which was taken from the literary science, to be useful we must forget what it had previously referred to and force it to refer to the images that show the story in statu nascendi. A bear named Teddy is most often the agent of the story. Who’s Teddy? In general, it is a character which in Csudai’s images acts as an intermediary between the natural and the supernatural world, the living world and the memory. It is the one who belongs to both the high and the popular art. It reminds the adults of the chilling thrill of life and the children of the joy in it. Teddy is a character capable to take any kind of a role that the story presented by the picture prescribes. This story is stuck in time: if the viewer wants to understand what it is about, the imagination must connect what took place prior to it and anticipate what will happen. The image will reward the ones who can do this with a great deal of aesthetic pleasure.

Another type is lyric work. In this case, the viewer will vainly look for a story in the surface of the picture because, because there is none. There are only characters and things and in fact, neither are important, nor the characters, nor the things. Important is what they convey – moods. The sadness, the melancholy, the fear, the joy, simply everything that like the keys strikes at the sensitive nerve endings and thus provokes affections, the familiar trembling of the soul, persistently escaping direct and unambiguous naming – for, as the philosopher says, each form has an affect, but an affect  has no form.

The last kind is drama work. In the pictures the viewer sees a scene and suspects that something happened there. Something tragic, which either altered the course of life or it took the lives of the closest ones, and thus reminds us of our finality. Or something comical, able to make our stumbling, mistakes or unnecessary stubborness an object of liberating laughter. Csudai’s scene paintings do not show the action, they show only the traces they left and they force the viewer to start their imagination in order to imagine what and why happened.

Three kinds of works by Ivan Csudai and one single painting individual style. He goes through them in a transversal way, he confirms the style with each new image and at the same time inconspicuously corrects it. These corrections do not lead to an ideal shape, perfect compositional form, but stimulate movement; they energize the creative path with the beginning, but without the end, because these paintings as real works of art are already touching the eternity, which has neither time, nor space constraints.