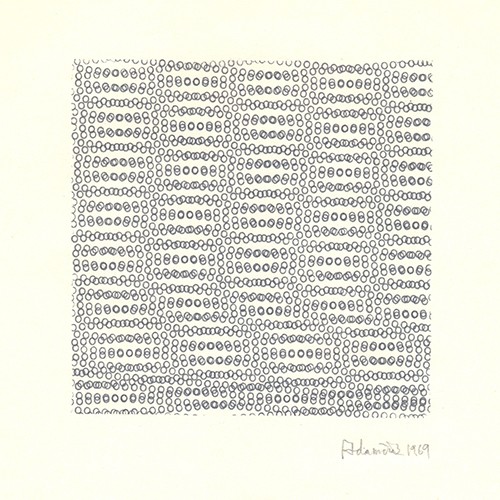 50 years of the relationship between art and poetry in Slovakia

The Visual Poetry exhibition maps experimental forms of poetry of the recent decades in Slovakia. This fact allows us to draw attention to the poetry of Slovak writers, and we mean both writers and visual artists who are close to intermediality. Therefore the exhibition represents both the writers who work with the visuality of the poetic text, and at the same time presents the work of artists who are inclined to poetry with their author’s texts.

At a certain point in history, the classical – codified form of poetry began to be too common for some authors and therefore they began to enrich it in various ways. Stéphan Mallarmé’s “A Throw of the Dice”,  Christian Morgenstern’s “Fish’s Night Song“, Filippo Tommaso Marinetti’s “Words and Freedom”, simultaneous Dadaist poems, Russian futurist poems, activities of Gertrude Stein and of many other authors – this is just the beginning of the rich and more than a century old history of experiment in modern world poetry. During this century we talk about different kinds of poetry in its interdisciplinary and intermedia variations. Optophonetic poetry, phonic poetry, spoken word poetry, verbophony and acoustic poetry all relate to voice and the performativity of the text in the auditory plane. Concrete poetry, kinetic, haptic poetry, photopoetry, videopoetry, action, conceptual, multimedia, teletext and TV poetry work with visuality of works. The implementation of mathematics into poetry creates serial, permutational or stochastic (random) poetry. The use of computers and new arts in poetry creates computer poetry, electronic poetry (e-poetry), digital, cybernetic, generative, algorithmic poetry, software poetry, interactive poetry, ASCII art poetry, net poetry, code poetry, QR-poetry, holopoetry, hypertext, infosthetic poetry, etc. By joint name we could call these types experimental or unconventional poetry.

In Slovakia experimental poetry is substantially less common than in the neighboring countries, the Czech Republic, Germany and Austria. In the Czech cultural context, with close contacts to the international scene, literally a movement with dozens of authors was created in the 1960s, and visual poetry exhibitions were held there already in the 1960s, 1990s, 2000s, and even nowadays. We cannot find such a massive probe into visual poetry in Slovakia. After 2011, two separate exhibitions of experimental poetry by Milan Adamčiak took place in Liptov Gallery P. M. Bohúňa in Liptovský Mikuláš and in Gandy Gallery in Bratislava. In 2015, the Poe(vi)zia exhibition was held in the Medium Gallery, which was the first publicization of extensive anthological research on this subject and was the predecessor of the extended exhibition Visual Poetry in the Central Slovakian Gallery in Banská Bystrica. Milana Adamčiak’s experimental and concrete poetry could also be seen at his retrospective exhibition Adamčiak, start! in the Slovak National Gallery (2017).

The Visual Poetry and the Poe(vi)zia exhibitions have the attributes of anthological exhibition, with the aim of providing an initial and basic orientation for subsequent research. One of the most prominent and most fertile artists of the 1960s is Milan Adamčiak, whose work from this period was presented in the book Archive I (EXPO) experimental poetry (2012) and Archive II (KOPO) concrete poetry (2016). At the turn of the 1960s and 1970s together with Adamčiak, Juraj Meliš and Rudolf Sikora participated at world exhibitions of visual poetry in Germany, Austria and especially in Latin America. The second wave of poets and intermedia creators begins in the mid-80s. Their work is still slightly influenced by the resonating 60s, but also the arrival of computers, performances, action and phonic poetry. The 1990s and the advent of computer typography allowed for the emergence of interesting move of poetic text toward visuality. Significant change and interest in unconventional forms of poetry can be seen at the end of the 2000s and especially in the last five – six years, when several books of young authors were published.

The exhibition consists of text samples and reprinted poems, since the poets have a different relationship toward the manuscripts than the visual artists who present the originals of their works. The exhibition also offers a number of publications that have been prepared by Slovak publishers in recent decades.